Agra - the city of Taj Mahal - is widely recognised as one of the most artistically inspiring cities globally. What makes this city a culturally rich destination is a total of three UNESCO World Heritage sites: the Taj Mahal, the Agra Fort and Fatehpur Sikri.
Thousands of domestic as well as foreign tourists flock to this city annually to view these wonders along with the other plentiful attractions present here. Along with Delhi and Jaipur, Agra is a part of the Golden Triangle tourist circuit.

The city, situated on the banks of the River Yamuna in the north Indian state of Uttar Pradesh, was chosen by Mughal Emperor Akbar as his capital. 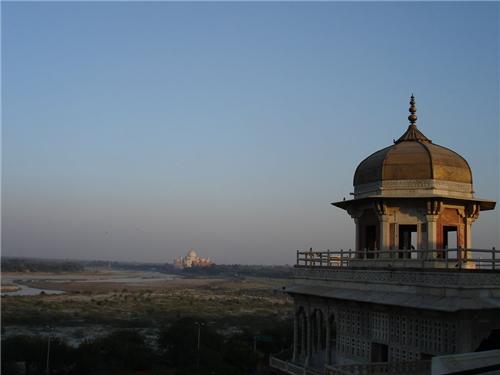 The city with its historically rich past, abundantly clear from the many splendid monuments from the erstwhile past in and around the city, is a tourist’s delight. We find the earliest mention about Agra from the Mahabharata where it is referred as Agrevana meaning ‘the border of the forest’.
And sources prior to the Mahabharata refer to Agra as Arya Griha or the abode of the Aryans. Agra was referred by its modern name for the first time by Ptolemy, the famous Greek astronomer and geographer.

A Brief History about Agra

Though we know about Agra mostly in relation to the Mughal Empire, the place had already been established much before it. Badal Singh has been said to have founded the city in 1475, and Delhi Sultanate ruler Sikandar Lodi made it his capital after another 29 years.
The loving memory of his wife Mumtaz Mahal saw Shah Jahan gifting Agra its most loved and famous monument, the Taj Mahal.
Click Here for More on History of Agra

Agra is located in the extreme southwest corner of Uttar Pradesh with the longitude and latitude of standing at 27.18°N and 78.02°E and with an elevation of 561 feet (171 meters). It is 363 kilometres on the west of Lucknow, the state capital, and 200 kilometres south of New Delhi, the national capital.
It has Rajasthan bordering its western and southern sides, the district of Firozabad on its eastern side and the districts of Mathura and Etah on its northern side.

Agra has a semi-arid instead of a humid subtropical climate because the monsoons here, though substantial, are not quite as heavy as in the other parts of India. The winters are mild and the summers are hot and dry.
The city is known for being one of the hottest towns in the country with the mercury going beyond 46°C at times. During the summers, the temperature during the day stays in the range 46-50°C, though the nights are cooler in comparison with the temperature dipping to a comfortable 30°C.
The winter season is the best time to visit Agra with the temperature hovering in between 6°C and 8°C. However, the minimum temperature can dip as low as -0.2 to -0.4°C. Monsoon in Agra sees an average rainfall 628.6 millimetres during the months from June to September.

Agra has a culturally rich heritage, with its harmonious blend of cultures belonging to different religions of Hinduism, Islam, Christianity and others under one roof. Every ruler has influenced the culture of this fame city and today we can see the impact of all in the forms of structures and age-old beliefs.
On one hand Agra has a very strong Brij influence of the tales of Lord Krishna due to its proximity to the cities of Vrindavan and Mathura and on the other it is also influenced by the Mughal culture having been ruled by the Mughals for long.
Agra also has remnants of the legacy left by the Rajput rulers who came before the Mughals. Hindi is the most important language of Agra along with languages like Urdu, English and Brijbhasa.

The rich culture of Agra is reflected well through the spectacular cultural events and festivals that are celebrated with great pomp and cheer in the city. The events are mostly religious festivals, rural festivals like village fairs or temple festivals and are unique in nature. The two major festivals in Agra are as follows:

This is a ten-day festival celebrating the traditions and spirit of the city. The celebration takes place in the month of February and the city at this time can be seen in its best glory. In Taj Mahotsav one gets to enjoy traditional food, shopping expeditions for some of the finest crafts, inlay works, pottery, carpets, traditional jewellery, silk textiles, footwear and accessories in the country.
Performances of folk dances, songs, ghazal evenings, procession of bejewelled elephants and camels in the grand Mughal style is a regular routine during this period.

Both these fairs in the honour of the Hindu Lord Shiva are held annually every year. The Bateshwar fair, taking place in October and November, is the place where devotees can be seen taking holy dips in River Yamuna as way of purifying themselves from the earthly sins.
A cattle fair is also organised where the locals participate in huge numbers. The Kailash fair is held during July and August and celebrates the appearance of shiva lingam in the sacred place.

Agra is a shopper’s paradise, but the secret to a good shopping experience here is to bargain, as the prices are generally inflated. There are many crafts to choose from, ranging from marble souvenirs (marble inlays), religious displays and paintings to traditional cloths, zardozi work, scarves and leather items.
Click Here for Details on Shopping in Agra

Food in Agra is an exotic experience with its widespread Mughlai food such as the rich, creamy curry dishes, kebabs, meats and breads prepared in tandoors, the traditional clay ovens. Dalmoth and pethas are also a big draw in the city along with the best of Indian street food such as chaats, panipuri, chilla and the likes, which is readily available at the ‘Chaat Gali’ in Sadar Bazar.
Dining out can be a relishing experiences at various restaurants like Taj Kheema, Olive Garden Multicuisine Restaurant, Dasaprakash, Pinch of Spice.

How to Reach Agra

Agra is 200 km away from Delhi and can be reached relatively easily, by air, train, or bus from there. Agra is also connected well with other nearby cities and tourist destinations via rail and road.
For commuting in and about the city there are environment friendly rickshaws or the motorbike-driven vehicles called the moto-rickshaws.
Air: The Kheria Airport in Agra, about 6 km away from the main city, has flights to the major metropolitans such as Delhi and Mumbai.
Rail: There are many trains connecting Delhi and Agra. The ‘Palace on Wheels’ is a luxurious option that in itself is an experience while visiting Agra. Other reasonably priced super fast trains are Shatabdi and Rajdhani along with numerous express trains. The main station of the city is Agra Cantt.
Road: National Highway 2 connects Agra to Delhi enabling a safe and fast drive. The Idgah Bus Terminal has buses plying between the city and all the main centres around it like Mathura and Fatehpur Sikri.