Also known as Agra Airport, Kheria airport is not only open to the civilians but is also the biggest military air base for the Indian Air Force.  It is located at a distance of 7 kilometres from the city of Agra. Since 63 years, it has been serving as the largest base of the Indian Air Force along with being a link to the most popular tourist destination of Uttar Pradesh, Agra. 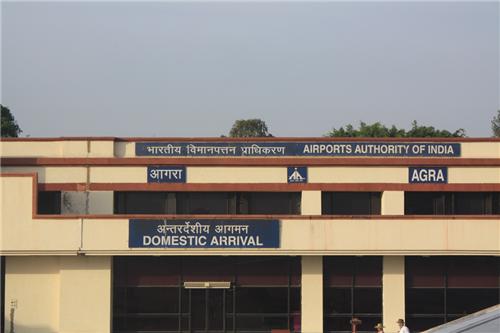 The Agra Air Force station got its identity on 15th August 1947 under the command of Wing Commander Shivdev Singh. Till 1971 it was the responsibility of the Western Air Command and is now taken over by the Central Air Command.
In these 63 years of its smooth functioning, the airport has seen many aircrafts like C-47 Dakotas, C-199 Packets, HS 748 ‘Avros’, AN-12s, AN-32s, IL-76s, MKI, etc.  Since then, the airport has maintained its stand as the biggest airbase and is serving the passengers with warm hospitality and prompt service.

Facilities at Kheria Airport in Agra

The Kheria Airport attends to every need of its passengers as their utmost priority. The passengers can avail the special facilities like luggage handling facilities, medical facilities and facilities for the disabled and the handicapped.
There are duty-free shops and currency booth exchange in the premises of the airport to serve the passengers. It also has lost property offices, post office, tourist information centre, TR booth and the postal services. You can also find plush lounges and snack bars in case your flight is delayed.

The Agra Airport has two runways. One is used for commercial flights and is open for public use. The other is primarily used for the military purposes. Recently the government has agreed to build a new International Terminal for the Agra Airport which will be spread over 50 acres of land.