Agra itself is the seat of historic monuments as well as the centre of a number of religious edifices ranging from Hindu to Muslims including the Jains and the Buddhists as well as the Sikhs.
Agra has on offer state-nominated and trained guides available at certain points and their services can be hired for a period of time to obtain in depth information about the areas one is planning to tour in and around Agra. 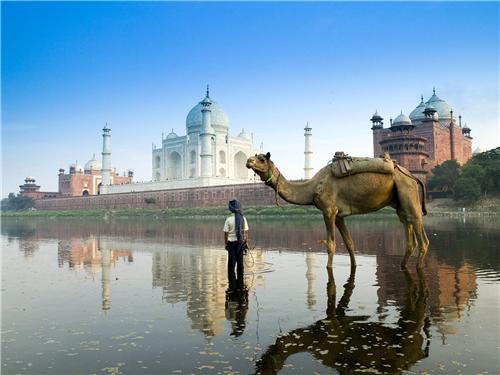 A one day trip to Agra seems too inadequate to cover all that the city has to offer. Agra, the historical site of one of the seven wonders of the world, Taj Mahal, has tremendous appeal for tourists from within the country as well as from abroad.

Some of the places that one must visit when in Agra are: The Taj Mahal, Agra Fort, Samadh of Soamiji Maharaj, Chini ka Rauza, Ram Baugh, Mehtab Baugh, Taj Nature Walk, Itimad-ul Daulah’s tomb (sometimes referred to as the baby Taj), Mariam's tomb, Sikandra, Jama Masjid, there are a number of temple devoted to Lord Shiva these are enumerated as such Mankameshwar temple and Balkeshwar temple among other.
Religious places like Buddha Vihar, Guru ka Tal and Jama Masjid besides St Peter’s Cathedral among others can be visited while on the trip to Agra. These routes can keep the most tireless of tourists busy and have the satisfaction a well spent day in Agra.

9.30 am; or 8.30 pm: Taj in the Sun or Taj in the Full Moon
Taj Mahal is reminder of the Mughal Emperor Shah Jahan’s love for Mumtaz Mahal, his dear wife.

11:30 am:Visiting the Red Fort of Agra
Agra Fort is located on the right bank of River Yamuna. Surrounded by a 21.4 m high fortification wall. The fort is spread over 94 acres of land. Click Here to Read More on Agra Fort

5.00 pm: Samadhi of Soamiji Maharaj
Soami ji Maharaj was born at Panni Gali, in Agra in 1875 of the Vikram Calendar. The Samadh is located on the Yamuna River.

6.00 pm: Mankameswar Temple
The history of Mankameswar Mandir is related to the childhood of Lord Krishna when Shiva visited him and laid down his linga on the banks of river Yamuna. It is believed that all wishes are fulfilled after visiting this temple.

6.45 pm: Guru ka Taal
Guru ka Taal is a historical Sikh pilgrimage dedicated to the 9th Sikh Guru Sri Guru Tegh Bahadur Ji. The historic structure dates back to 17th century. Earlier it was a taal (reservoir) in the area near Sikandra. It was built in 1610 AD to collect and conserve rainwater in Agra during Jehangir’s reign.

Meanwhile you can shop various handloom products from Agra near the above mentioned sites and enjoy the very famous Agra ka Petha.