Taj Mahal, a magnificent architectural work was contributed solely to Begum Mumtaz on her sudden and unfortunate demise. While delivering the 14th child, Mumtaz breathed her last. Shah Jahan, her beloved could not stand this unexpected shock. He decided to dedicate his true and pure love for her by building an incredible mausoleum entirely for her.
The dome, the Mausoleum, The Garden, the Gateway, the Mosque, The Water works are perfectly synchronized with each other to offer an incredible heavenly look to this wonderful Taj Mahal. 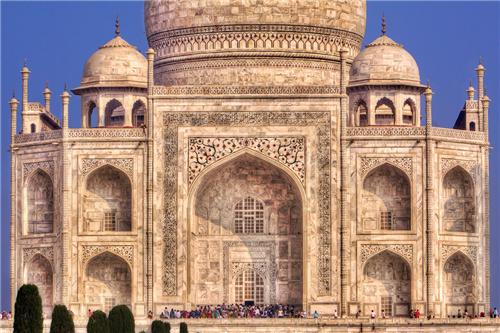 This is one of the fine monuments built around the world so far. India received such an outstanding creation under the Mughal rule. Taj Mahal adheres to the Islamic style of architecture. It entirely is the result of the meticulous effort of 22,000 masons and the chief architect. The painstaking work done by the fine artists all over the world is indeed praiseworthy.
The labourers, with their entire hard endeavour, had harmonised this grand tomb by brilliantly placing all the features, keeping the minute details in mind.

The layout of this grand historical monument is built in the Islamic style, also known as the Indo-Islamic style. This White Paradise is built on a raised platform, which acquires an area of 93.9 square meters and is of height 6.6 square metres.
The principal structure is about 62 metres high on either side, while the corner minarets are about 41.1 metres high. Made of numerous symmetrical gleaming white marbles, the Mausoleum will make you go head over heels. To offer a perfect contrast, the tomb is flanked by a pair of bright red sandstone buildings in its east and west.
The building on the western side of the tomb is the mosque, while the other one is referred to as the museum or the guest house. The fountains and the water causeway artistically connect to the tomb and gateway in perfect evenness. 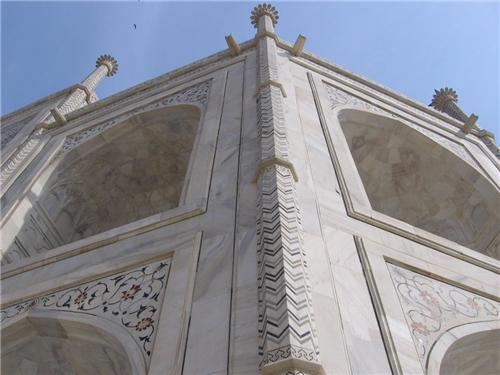 Indeed, the uniqueness of the design was not brought about with the drop of the hat. It so beautifully presents the evolution of the tomb in the Indian history. The location of the enormous structure is smartly chosen so that the imposing tower looks magnificent over its surroundings.

The Dome of Taj Mahal

A bulbous double dome is mounted attractively on the tomb. The white-coloured dome has lotus petals and stunning Kalasa-finial. With a complete height of 145’8”, the globular dome rests on a wonderful drum. The four angles of the dome are flanked by the Chhatris, which are seemingly attached to the dome.

Mausoleum and Minarets of Taj Mahal

Located just in the middle of a rectangular sandstone platform, the classic mausoleum is the key attraction of Taj Mahal. The tomb stands on the platform; the latter also known as Chameli-farsh. The dimensions of the mausoleum is 364’10” (North-South), 970’7” (East-West) and is at 4’ height from the garden level.
The tall circular minarets are 132’ in height, each of which is three-storeyed and separated from each other by a balcony. Even though the chief white tomb is a perfect square of 187’ on either side, yet it reflects an octagonal shape owing to the chamber at each of the angles.

This red sandstone gateway cleverly hides the vision of Taj from a distance. You have to enter through the gateway to have a glimpse of the magnificent Taj. It takes you to the courtyard. The gateway is so nicely ornamented with neat calligraphic works with verses from Quran.

Indeed, the waterworks shows a great foresight and intelligence. The main aim was to have uniform water pressure in all the fountains. A copper pot was placed under each fountain pipe; the latter was connected to the water supply.
So water fills each of the pots first and then rises evenly in the fountains. This great invention is so exemplary. The water works add a blissful touch to the entire architecture of Taj Mahal. The fountains, till date, are being consistently controlled by the pressure in the pots, leading to an identical water supply in all the fountains. 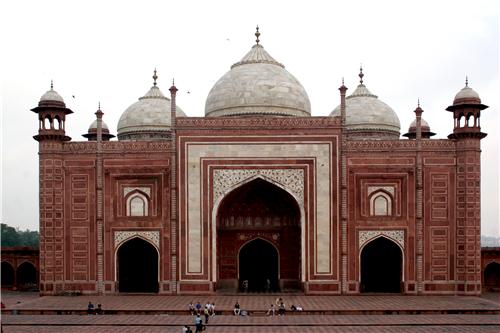 The building to the west of the Taj Mahal is the mosque, carved out of sober red sandstones. This Mosque faces Mecca. The plinth in front of the Mosque is also made of red sandstone. You will find intricate scriptures with the name of Allah along with exquisite calligraphy. The roof of the mosque supports 3 graceful domes and 4 octagonal towers.

The lush green garden offers a foreground to the magnificent view of Taj Mahal. The smart planning of the garden utilizes raised pathways that separate each quarter of the garden into 16 flowerbeds. The garden also showcases a raised water tank made of marble exactly at the centre of the gateway and the tomb. The Charbagh garden in Taj Mahal elegantly presents the four Rivers of Paradise.

Also known as the Moon light garden, Mahtab Bagh is located at the northern side of the Taj Mahal. This has four sandstone towers on its four sides.
Interiors of the Taj Mahal

The interior hall assumes a perfect octagonal shape, measuring 80’ in height and 58’ in diameter. On the four sides, it has an arrangement of four rectangular rooms. While, on the four corners, there are four octagonal rooms, all of which are connected through passages.