Business and Economy of Agra

Agra is a small city of Uttar Pradesh located along the banks of river Yamuna. Although famous for its monuments, Agra also has quite a vast industrial base. The modern city of Agra was founded by King Sikandar Lodhi way back in the 16th century. Sikandar Lodhi was a king of the Lodhi dynasty.
Agra was considered to be one of the most influential and powerful cities in India in the Mughal period. 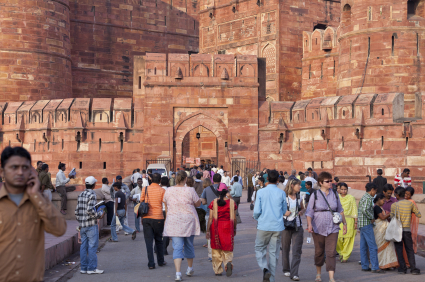 Agra is famous for its monuments, especially the Taj Mahal and the Agra Fort. Since, Taj Mahal is one of the seven wonders of world, there are tourists coming into the city throughout the year. The tourist’s influx alone is around 1.8 million per year.
This has made tourism a major source of income for both the people and the government of Agra. There are a number of hotels and restaurants which have sprung up throughout the city.
There being so many tourist spots you will easily find hotels in every locality. Hotels, from budget to 5 star, are all available and many more are coming up which has helped generate employment for the people and also aided the state’s economy.

The district industries centre of Agra was set up in 1979 which has helped speedup the industrial development in and around the city. District Industry centre act as the nodal agency for establishing any industry in the district. The main industrial area of Agra is the Industrial Estate of Nunhai.
It is spread over 71 acre of land. Another small industrial area situated at Achnera has 30 plots spread over two acres of land. Also there is the Uttar Pradesh S.I.D.C. Industrial Areas.
The major industries of Agra are electrical goods, pipes, fans, C.I. Casting, steel rolling, floor, packing and milk products. There are some 7200 units in the small-scale industry bracket. They produce cotton and textile, stationery, leather goods, wood paper products and metal products and auto and engine parts.

According to the Agra Cold Storage Owners Association (ACSOA), Agra has a cold storage capacity of 2.2 million tonnes. Most of it is used to store potatoes. Agra stores 7% of the cold goods of the country which is much more than the whole of Punjab.
This is equivalent to the combined cold storage capacity of Maharashtra, Madhya Pradesh and Karnataka all put together.

In Handicrafts, Marvel, Zari Zardozi, inlay work, Stone carving and Carpets about 13000 people are working. There are 116 exporting units. There are two Padma Shree Award winners Shri Hari Kishan Badal and Mr Sekh Samruddin, also there are 37 States and National awards winners of handicrafts.
The leather industry is one of the most traditional and oldest industries of Agra. More than 1.5 lakh pairs of shoes are manufactured in the city per day by the small scale, cottage and medium scale footwear units.
3000 tiny units, 30000 household units and 60 organised units of footwear are present throughout Agra. About 65% of India’s total requirement of shoes is supplied from Agra.