Chini ka Rauza is one of the important monuments of Agra. It's a mausoleum that is situated in Itmadpur, at one km distance from tomb of Itmad-ud-Daulah and is very close to Taj Mahal. Located at the eastern bank of river Yamuna, the tomb is dedicated to Allama Afzal Khan.

Mulla Shukrullah Shirazi or Afzal Khan was then prime minister in the court of Mughal Emperor Shah Jahan and was also a famous poet. He wrote poetry under the pseudonym of 'Allami'. It is said that he built his own mausoleum following the tartary tradition, in 1639 with elaborate ornamentation.
He selected glazed tiles as the medium to create the beautiful monument that would distinct his tomb forever from others. Every part of this unique monument is adorned with bold color schemes and the material known as porcelain.
The name was given to it because porcelain from which the glazed tiles are made is also known as Chini Mitti or Chinese clay and said to be brought from China. 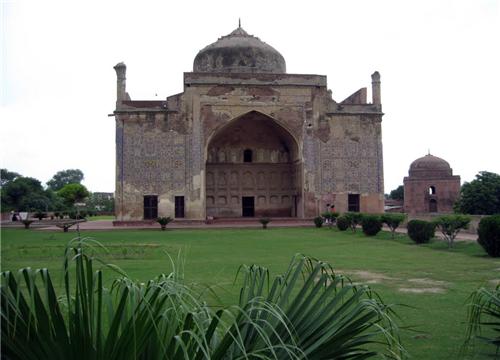 The monument justifying its name is made with glazed tiles china and mud. The tomb is built with combination of Afghan style and Persian architecture and is the only monument in India that is built with this unique combination.
The whole building was built in rectangular shape with colorful tiles and brown stones. The original tomb was splendid and the walls are decorated with various Islamic inscriptions.

Most of the tomb is in ruins and only major parts of the main tomb survived. The original tomb had two gates, one in north and the other in south. The shape of tower was octagonal and rose as a three storeyed tower near the ghat.
Each side of the tomb is about 79-feet-long. The central chamber has eight arched divisions which include four square openings and four pentagonal arches going into all four directions.
This central chamber is connected to four other chambers in each corner that has side halls or porches. The upper part is constructed in a way that gives a double-storey effect to the building. The dome that crowns the building displays an inverted lotus and a kalash on the top of center and all four corners.

Both interior and exterior of the tomb displays its unique architecture with colorful intricate work is found in the brackets, balcony and on chajja. The arches of the tomb are decorated with intricate designs including orange and blue tiles.
The inscription on each side of the central part of the building is done in blue colored tiles and is bordered with green, yellow and blue tiles making beautiful patterns while the spandrels are decorated with orange and blue tiles set in floral and arabesque patterns.
There is a combination of orange, white and crimson tiles making zigzag pattern on the shafts of the arches, while on the pinnacle of chevrons is adorned with band of blue tiles.
Remaining spaces are filled with blue, orange and green floral designs. Almost whole of the building was covered with glazed tiles of different hues and shades, most part of which is partially damaged.

There is no entry fee to visit this monument. The tomb is open from sunrise to sunset but may be closed on national and local holidays so it is better to check before visiting.


How to Reach Chini ka Rauza in Agra

Chini ka Rauza is situated very close to Taj Mahal and just 1 km away from Itmad- ud- Daulah Tomb in Ram Bagh, and can be reached in auto rickshaws, or electric rickshaws or local rickshaw.