Jainism has its roots spread far and wide in the whole country. Some of its gods or Teerthankars are related to the characters of Mahabharata Era as well. There are many Digambar Jain Temples in Agra; history of some of those is parallel to the history of India. 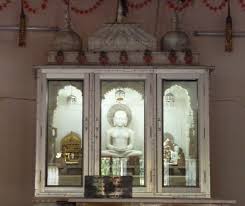 Shouripur is a very old city that was established at the shores of Yamuna River. It is the place where 22nd Teerthankar of Jain religion, Bhagwan Neminath’s Kalyanak took place. It is also related to Supratishtha Muni as he got his supernatural knowledge or Kevalgyan here. Few other munis naming Muni Shri Dhanya, Shri Vimlasut and Muni Shri Yama attained their Salvation at this place.
The city of Shouripur is sacred for followers of Jainism as it is the Siddha Kshetra and Kalyanak Bhumi of their munis. Other teerthankars such as Bhagwan Neminath, Bhagwan Mahaveer, Bhagwan Adinath and Bhagwan Parshvanath also arrived here at different times.

Shouripur was very famous and prosperous city as mentioned in Harivansha Puran and Mahapurana. It was established by Yaduwanshi king Narpati’s brilliant son Shoor The ruler of Shouripur ‘Andhak Vrishni’ had 10 sons, eldest being ‘Samudra Vijaya’ and the youngest ‘Vasudev’. Kunti was his daughter.
Pandavas were the sons of Kunti while Krishna and Balram were sons of Vasudev. For this reason both Krishna and Balram were referred to as Shouris in olden times. Bhagwan Neminath, the 22nd Teerthankar of Jain cult was the son of Samudra Vijaya. Acharya Lokchandra, the renowned scholar and the Guru of Acharya Prabhachandra hailed from this kshetra.
The famous work on Jain Nyaya ‘Premya Kamal Martand’ was written here by Acharya Prabhachandra. This ancient place was excavated by famous historians General Cunningham, Carlyle and Colonel Tad in 19th century. It proved that Shouripur was a prosperous and wealthy city as lots of olden currency and gems were found here.
Up to 19th century, the place was sacred as the seat belonging to Digambar Jain Bhattarkas was here, spreading religious teachings, acquisitions and speeches.

The ancient temple slowly declined leaving only some ruins. The remnants of various Jain temples are the only symbols of history remained in Shouripur. In 1667, the ‘Adi Mandir’ was built here on the instructions of Bhattaraka Vishva Bhushan. Other temples at this place are:

The land of Shouripur was washed away by the floods of River Yamuna and became more ruined removing the possibilities of visit there. To provide an alternate, Bhattaraka Jinendra Bhushanji built a huge temple and a Dharmashala at Bateshwar.
The temple was built on a ghat, the place on the bank of river where landing and bathing is possible. This temple was developed by the king of Bhadavar state Raja Badan Singh in Vikram Samvat 1838. The very artistic, 5-feet-high, black-colored idol of Bhagwan Ajitnath sitting in Padmasana is installed here. It is said to be brought from Mahoba.
This idol was installed on Monday, the seventh tithi of Vaishakh Krishna Paksha in Vikram Samvat 1224 in its Primal state by the father of the great warriors, ‘Aalha – Udal’ known as ‘Shravak Shrestha Jalhan’. This temple is a beautiful example of architecture of olden times as its two stories are visible above the ground while two stories are below the ground level.

Constructed on a platform, it is the oldest temple at Shouripur. Here the main Deity is of Bhagwan Neminath sitting in Khadagasana. The idol is built of a magnificent black stone and is said to be constructed in Veer Nirvan Samvat 2480.
It is 8 feet high with a stone spire over the idol and has an artistic halo of carved stone behind the idol. There are two lions facing each other on the base. Between these there is an image of Conch shell.

This place is on the left side of Shankha Dhwaj Mandir. The ancient Tonks & Spires or umbrellas are constructed in a ground which is covered by walls from all sides. This place is famous as Panch Mathi. The small foot images of Muni ‘Dhanya’ and Muni ‘Yama’ are installed here.

How to Reach Shouripur-Bateshwar Dham in Agra

Shouripur-Bateshwar is around 71 km from Agra Cantt Railway Station. To reach here, one should head towards northeast direction on Sadar Batti Road and after 300 meters, should take first right staying on same road. Drive for 700 meters then take right turn, going through 1st roundabout, driving straight for 1.2 km.
Then take right on Fatehabad Road, drive for 600 meters. Continue on the road for 31 km passing Levi Strauss Signature, then go past 1st roundabout, pass by G. K. Filling Station on the right.
Continue on the Firozabad Road for other 2.9 km, then move to Arnota Road and drive for 9.8 km. Pass on SH 62, drive for 17.3 km, turn left at Farera Tea Point onto 77W and drive for 5.2 km. Reaching Bateshwar road, drive for other 2.5 km, the destination is on the left side.

There are few other Digambar Jain temples in Agra. Some of these are listed below with their respective addresses: