Agra is bursting with energy - the people, their traditions, culture and clothes and especially the cuisine of the city reflects the spirit of this city of the Seventh Wonder in the world. The travel experience remains incomplete if you do not get to taste the awesome cuisine of the city.
The rich culture and heritage that this city has inherited from the Mughal rulers is not just restricted to the beautiful monuments but extends well to its food. The Mughlai fare with its share of kebabs and different preparations of meat is an added attraction for the tourists.
You can taste the delectable spread at most of the restaurants and hotels present in the city. The other most important thing is the famous petha of Agra, renowned all over the country. The other well-known foods from this city are the tasty chaats, sweets and savoury dalmoth, which are easily available all over the city. You can take your pick from any of the foods given below. 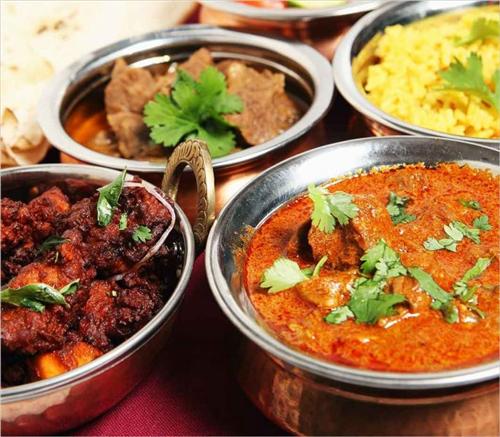 What to Eat in Agra

Agra is the place to be in if you love chaat, parathas and other North Indian street foods like pani puri, dahi bhalla, samosa, kachoris, cheela and the likes. And these various types of spicy but immensely tasty Indian street food make Agra all the more popular.
You can also savour the typical Agra breakfast of spicy berahi along with jalebies. The chaats and other street food are generally available after 5 pm. Some of those lip-smacking items that you can indulge in are aloo tikki, papri chaat, paneer tikka, cheela, pani puri, mangore, samosa, kachori, pav bhaji and dahi bhalle.

The most well-known sweet item of Agra is the petha, a kind of translucent confectionary, available at a number of shops. You can choose from a number of flavours available for the same-kesari petha, angoori petha, paan petha or the plain petha to name a few. 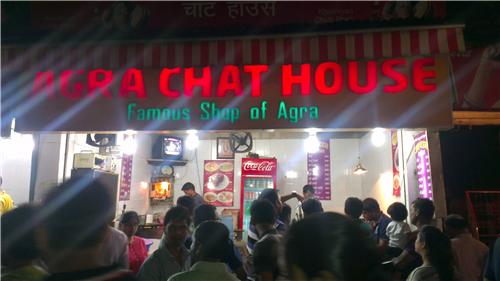 In present times, the food from Mughal kitchen has found its way to that of the common people in the form of kebabs and different meat preparations that the restaurants in Agra have to offer. The food is generally prepared in using cream, curd, nuts and milk
The meat dishes are cooked in a mix of spices that renders them the exotic flavour. Some of the best Mughlai dishes available are Tandoori Chicken, Chicken Tikka Hara Bhara, Kadhai Chicken, Mutton Afghani and Rann Mussallam.


Where to Eat in Agra

Agra is teeming with good places to eat and you can take your pick from any of them. For chaat and Indian street food the best place is the famous Chaat Gali in Sadar that offers one of the best street foods in the city. Other well-known places are Double Phatak (near Sikandra) for mangore, Belangunj for bhalla and pani puri and Kinari Bazaar,
MG Road, Pratap Pura and Raja Mandi bazaar for the other street foods. You can get samosa and kachori at any of the sweet shops in the city. If you want to treat yourself to the tasty jalebis with rabri or any other sweets you can take your pick from sweet shops such as Deviram or Brijwasi.
Read More About Agra, Administration in Agra, Agra Road Trip, Agra ka Petha, Agra Beyond Taj Mahal, Famous Agra Fort, Ambulance Services in Agra, Architecture of Taj Mahal, Black Taj Mahal in Agra, Buses from Agra, Courier Services in Agra, Chemists in Agra, Culture of Agra,  Emergency Services in Agra, Fast Food in Agra, Golf Club in Agra, Hotels near Taj Mahal,  Important Links of Agra, Top Restaurants in Agra, Mental Hospital in Agra,Veg Restaurants in Agra, Property Dealers in Agra, Lifestyle in Agra, One Day Trip from Agra, How to Reach Taj Mahal, Art and Craft Classes Agra, Gyms in Agra, Banquet Halls in Agra, Chini ka Rauza Agra, Kailash Fair in Agra, 3 Star Hotels in Agra, 4 Star Hotels in Agra, 5 Star Hotels in Agra,  Govt Hospitals in Agra, Balkeshwar Temple in Agra