Agra is the most popular city of Uttar Pradesh and also the most visited tourist place in India. It is a part of every first-time visitor's itinerary so as to witness the love monument, the Taj Mahal.
Agra has been home to three generations of the Mughal Era. It was once a place filled with talented and wealthy people who have now been immortalized in marble and stone. Agra is on the Yamuna River, a tributary of the Ganges River, about 185 km southeast of the capital of India, New Delhi. 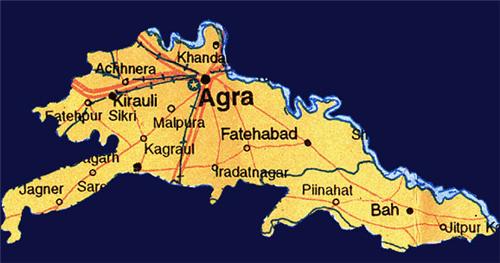 Agra is located at longitude 78 deg 05' E and latitude 27 deg 10' N. Mathura is to the north of Agra and to the south is Dhaulpur. Firozabad District covers the city from the east and on the west comes Bharatpur District.

Agra has a semi-arid climate which borders the humid subtropical climate. The monsoon in Agra is very light as compared to the rest of the nation. The average rainfall between June and September is 628.6 mm.
Agra is very hot in summers and the mercury crosses the 46 deg Celsius mark very often. The mornings may go up to 50 deg Celsius but the nights are cooler at 30 deg Celsius.
The humidity leaves people panting. The winters on the other hand are very cold, with temperature going as low as -4 deg Celsius in the nights although it usually hovers at 6-8 deg Celsius in the morning. Winter is the most preferred time to visit this city. The days are warm and sunny which is ideal for wandering around the beautiful city.


Types of Soil in Agra

The soil mostly comes from the Indo-Gangetic plains and mostly consists of the quaternary sediment. The recent unconsolidated fluvial formations are a part of this soil and the soil also contains sand, silt and clay. It has a very fine texture.