Gurudwara Mai Than Sahib in Agra 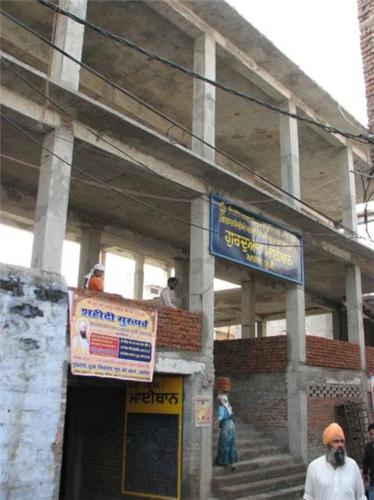 The home of a saintly lady devotee of the Sikh Gurus has been given status of a Gurudwara. The Gurudwara Maithan is testimony to the fact that devotees of all sections of life have congregated towards Sikhism.
Before the advent of the Guru into her life, Jassi lived in Agra, when the city was a quite, sleepy hamlet. Jassi was totally devoted to Lord Krishna and worshipped him.
She lived with an image of the Lord believing him to be her consort.

One day Guru Nanak Dev ji visited Agra as a part of his Udasis, travel to the South. Jassi was most impressed by his simple yet profound teachings and decided to become his devout follower. Her home became the centre of Sikh discourse.
Then much later, the fourth Guru, Guru Ram Das sent his devotee Bhai Gurdas ji to stay at Mata Jassi’s home. He stayed there for two and a half years to preach Sikhism and to write ‘Kavitt Swaiye’. Years later she met the sixth Guru, Guru Hargobind Sahib ji. She was over 175 years old at the time.

The one singular feat for which the Gurudwara gets its name is when the ninth Guru, Guru Tegh Bahadur visited Agra. He was presented with gifts by many of the renowned citizens of the region. Makhan Shah Lubana gave him a horse while Chacha Faggu of Sasaram presented him a bed.
Mata Jassi, meanwhile, had been weaving a large length of cloth or a bale which colloquially was known as a ‘Than’. She lovingly presented this ‘Than’ to her Guru who accepted it with equal love and care. It is this gifting of the ‘Than’ which earned the Gurudwara its name of ‘Mai Than Sahib’ at Agra.
The second memorable part of the existence of the Gurudwara stemmed from the fact that the 9th Guru Shri Tegh Bahadur was asked by Mata Jassi as to how she would be remembered after she had shed her mortal remains.
The Guru replied saying she would convert her home into a Gurudwara which would, down the ages, be called as Gurudwara Mai Than Sahib or the place where the hand spun cloth was made and handed over to the ninth Guru.


About Gurudwara Mai Than Sahib in Agra

The Gurudwara in itself is a three storey building situated in Mai Than Mohalla of Agra city. It was the centre of Agra at that time. Currently the Gurudwara is registered as Sri Guru Singh Sabha. It is being maintained and administered by the Shri Guru Tegh Bahadur Central Board.
The holy scripture, the Guru Granth Sahib is placed in the central sanctum of the Gurudwara. Guru Tegh Bahadur Sahib, the ninth Guru reached Mata Jassi’s home, the present Gurudwara Mai Than Sahib, in 1664-65 AD.

During his stay he was requested by the Agra dwellers for a well. Guru Tegh Bahadur laid the foundations of a well made through the volunteer service of the devotees. This well exists till date and has sweet and pure drinking water for the devotees thronging to the Gurudwara.

Mai Than or Mataji as she was popularly known met the ninth Guru the second time is 1675 AD.
It was here that Mataji shared her fears with her Guru saying that she had no heirs and had no idea if she would ever gain salvation as she was virtually alone.
The Guru had kindly explained to her that she would be immortalized as Mai Than Sahib and all her devotees were her children who would look after her in the after world. In 1944 this Gurudwara was formally ordained as attached to the Central governing jurisdiction of the Singh Sabha.