The health care delivery scenario in Agra includes the provision of healthcare through several institutionalized and community based forms of delivery. Both involve the cooperation and guidance of NGOs who run the Urban Health Centres on the one hand and on the other hand which are totally committed and responsible for the communication of relevant health. 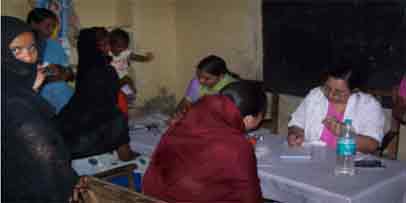 There have been a number of approaches used by the Agra city to ensure that all the national-level programmes are carried out from time to time like the TB DOTS treatment programme.
UP had been the state of origin of almost all the polio myelitis infections observed in the world.

Thus, the institute developed special facilities and faculties for the provision of professional teaching and research besides conducting a number of  training and capacity building exercises tailor made to the needs of the inmates.

A small initiative that ensures that at least ten persons at any given time are making the final and fruitful effort to be reestablished with the normal community and making a worthwhile contribution to their families has been established in the Family Ward of the hospital and is termed as ‘Halfway Home’ because there every effort is concentrated on ensuring a safe return for the inmate to his own home.
They are taught certain skills that can help them become self sufficient earning members of their families.

These partners can be enumerates as: The Department of Medical Health and Family Welfare, Agra which is the apex institution and has a wide block and village level networking of health personnel who are interested in keeping the epidemics and huge number of infectious diseases away from the city and Agra itself.
Their best practices partners are the number of women groups that have been designated and given the task of sustaining the programmes of National and State level significance in a primed stated always.

These women federations are: Bhartiya Mahila Vikas Samiti Narayich, the Parivartan Mahila Shahri Swasthya Samiti Garhi Chandani, Chetna Mahila Vikas Samiti Shyam Nagar and Vishal Shahri Mahila Saamiti Ramnagar.
These were the fifty Basti based Mahila Aroygya Samities; slum healer centre besides several other qualified or Registered Medical practitioners who take care of all forms of manifestations of disease. There are few other states with such a provision.