There is plenty of Mughal architecture in the city of Agra and the most important of them is Jahangir Palace. The Palace, also known as Rani Mahal, is one of the most extensively planned and elegantly crafted monuments of the Mughal Era.

The architectural marvel lies in the Agra Fort and was built by the Mughal Emperor Akbar as an exclusive palace for his favorite son, Jahangir. Of all the residential buildings in the Agra Fort, this is the biggest. 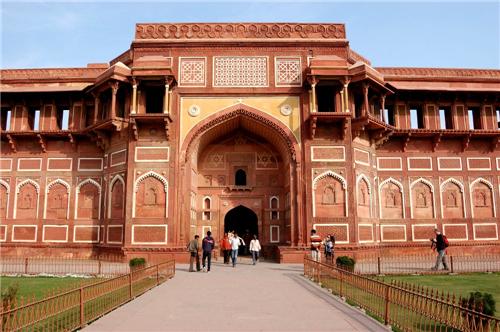 Jahangir Palace is a perfect coming together of Central Asian architectural style and the tradition of Hindus. The Palace clearly borrows heavily from the Hindu elements and proves that Akbar, who was although a Muslim, preferred Hindu designers and engineers.
Some also say that this palace was built for the women belonging to this royal household, mainly the Rajput wife of Akbar. This legend gave this monument another name and is also now popular as the Rani Mahal or Queen Palace.

The Palace was built by Akbar in 1570 and was later modified by Emperor. Chhajas, chhatris and jharokhas have been used extensively to beautify the complex. As one enters, he will notice a huge tank which is 5-fee-tall and 8 feet in diameter.
This is Jahangir’s hauz, which was a mobile tank and had stairs both in the inside and the outside of it. The decorated gateway leads one to the interior courtyard. The grand halls surround the courtyards from all corners. These halls have been designed with elegance in the Gujarat-Malwa-Rajasthan style. One can see the carvings which have been adorned on them with stone, piers, crossbeams and brackets.
The Khas Mahal is another beautiful part of this Palace and is made completely out of white marbles. The marbles, although very expensive, were used because they kept the residence cool even in the hot summers. The octagonal tower which is set next to the Khas Mahal is called the Musamman Burj. This was where Emperor Shah Jahan breathed his last after being in prison for seven years.
Jodha bai was the only Hindu wife of Emperor Akbar and had a private dressing room within the Shish Mahal which was designed with an eye on the Hindu lifestyle. The central garden which was designed in the typical Mughal style is the place where the Kings went to spend some time of solitude.
This garden is known as Anguri garden as it was filled with grape trees, known as Angur in Hindi. The expertise of the Mughal engineers and designers can be epitomized in the Hauz-i-jahangiri. This is a huge bowl which has been carved out of a single stone and lies just in the front of Jahangir Palace.

Jahangir Palace in Agra Timings: The Palace is the most important monument built under the prosper era of Emperor Akbar and is a must visit as it aptly describes the Mughal lifestyle and culture. Jahangir Palace is open throughout the year.
The fort accepts people as early as 6 am and the entry is shut at 6 pm. The Palace is open even on Sundays and public holidays. There is a nominal entry charge and no pets are allowed in the Palace.


How to Reach Jahangir Palace

The Palace is only 11 kms from the Agra Cantonment Railway Station and one can take a taxi or a bus from there. The people driving to the palace can start off via the SH 39. Take a roundabout after 3 kms and the destination will be on the left.
It can also be reached easily from the Idgah Railway Station which is only 3.2 kms away. Starting from there one must stay on the Fatehpur Sikri Road for 2.4 kms and then take the second left and drive for 240 m. Take a right from there and drive for another 650 m. The destination will be in front of you.
Read More About Agra, Administration in Agra, Agra Road Trip, Agra ka Petha, Agra Beyond Taj Mahal, Agra Fort, Ambulance Services in Agra, Architecture of Taj Mahal, Black Taj Mahal in Agra, Buses from Agra, Courier Services in Agra, Chemists in Agra, Culture of Agra,  Emergency Services in Agra, Fast Food in Agra, Golf Club in Agra, Hotels near Taj Mahal,  Important Links of Agra, Top Restaurants in Agra, Mental Hospital in Agra,Veg Restaurants in Agra, Property Dealers in Agra, Lifestyle in Agra, One Day Trip from Agra, How to Reach Taj Mahal, Art and Craft Classes Agra, Gyms in Agra, Banquet Halls in Agra, Chini ka Rauza Agra, Kailash Fair in Agra, 3 Star Hotels in Agra, 4 Star Hotels in Agra, 5 Star Hotels in Agra,  Govt Hospitals in Agra, Balkeshwar Temple in Agra, Fatehpur Sikri, Kailash fair, Jama Masjid, Chini ka Rauza, I'timad-Ud-Daulah's Tomb, Keetham Lake, Akbar's Tomb, Mehtab Bagh, Food in Agra, Emergency Services in Rajasthan, Taj Mahotsav,  tomb of Itmad-ud-Daulah, Agra Fort. Mathura ka Peda, Aligarh, Chikankari Lucknow, Tomb of Itimad-ud-Daulah, Chini Ka Rauza