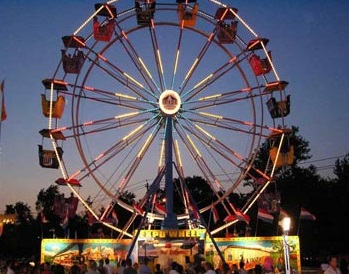 People during Kailash fair celebrate the appearance of Lord Shiva in an incarnation of a stone lingam. Belief has it that whosoever bows before the Kailash lingam during the Fair all their wishes and desires would be fulfilled. Many of the Shaivite devotees would throng to the temple as there is a strong and sincere belief that Lord Shiva himself is present all through the celebration of the Kailash Fair in Agra. Devotees are blessed with his choicest blessings. All wishes are granted here. Every year thousands of devotees throng to the Kailash Temple. They offer their humble prayers to Lord Shiva and then seek his blessings. Once they have propitiated themselves at the feet of Lord Shiva, the devotees give themselves upto the celebration of festivities that mark the Kailash Fair Agra.

Kailash Fair is among the most colourful fairs that take place in Agra and its nearby areas. The entire township of Kailash is decorated with colourful paper and boil streamers and brilliant lights. All the streets and stalls are well laid out. The wares are displayed attractively both inside the shops and even out on the pavements and in the streets besides even on vender stalls and carts.

Although a mere twelve kilometers from Agra, the quaint settlement of Kailash has made a name for itself because of the observance of the major annual activity of that little spiritual niche. The yearly celebration of the Kailash Festival takes place during the months of August and September.

There are displays of garments, clothes, utensils, toys and various forms of entertainment. Then there is the universal variety of food and a delectable variety of sweets. The weather is balmy though slightly dusty and it is a most pleasant time of the year just after the monsoon. The cosy township is most inviting as it emanates a welcome to all tourists.

The proximity of Kailash to Agra and Mathura makes it a must see on the itinerary of the average tourist is that sector. It is definitely a place to visit for the devout pilgrim who seeks the blessings of the divine Lord Shiva, the Destroyer. The Kailash Temple stands lofty, head and shoulders above all other religious edifices.

The religious aspect apart the Kailash Temple is a place of seven beauty and peaceful meditation.
During the Kailash Fair it is a feast for the tourists to see all the streets, shops and sundry stalls decorated out like is bride in all her finery.

There is an aura of festivity, joyousness and happiness all through the site as if the very Earth itself is celebrating the presence of the Lord Shiva himself. There are streams of milk, tones of sweetmeats and foodstuffs distributed among the devotes during the entire duration. The Shiva mantras are chanted all through the streets and stalls of the Kailash Fair.

Explore more about Culture of Agra