Agra is a beautiful city that hosts a lot of old forts, mausoleums and monuments. Besides these examples of typical Mughal-era buildings, it is also home for a few ancient temples. Mankameshwar Temple is among these ancient temples.

The divine temple of Lord Mankameshwar is at Rawatpara area in Agra city. It is among those very ancient temples that are dedicated to Lord Shiva and is very unique in the terms that it is covered with silver metal.
The age-old belief is that Lord Shiva founded the swaroop of shivlinga himself in the Dwapara era at the time when Lord Sri Krishna was very young. For the darshan of child form of Lord Krishna, Shiva left the Mount Kailash and descended to reach Gokul, and at this place.
Lord Shiva stayed here at night and meditated at the Mankameshwar, on the banks of Shamshaan Yamuna which is believed to be here at that time. He wished that if he would somehow make little Krishna play on his lap, He will put his linga swaroop here. 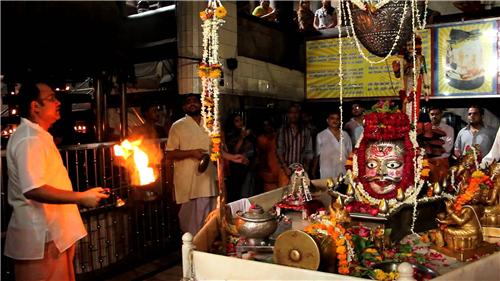 Next day when Lord Shiva went to Krishna’s house, Ma Yashoda saw Shiva's swaroop and frightened by that, she asked Lord Shiva to stay away from the little child as Krishna may get scared of him. When little Krishna observed this, he performed a leela (drama).
He started crying and pointing towards Lord Shiva who at that time was sitting near their home under an old banyan tree in the position of Samadhi. When Ma Yashoda saw this, she invited Lord Shiva near their house and requested him to shower his blessings on little Krishna.
While coming back from Gokul, Lord Shiva stopped here in Agra and laid his swaroop here in form of a linga. He declared that as his wishes were granted here, in future whosoever comes at this place with his manokamna or wishes, his linga swaroop will fulfill all wishes. Thereafter, this swaroop came to be called as Shri Mankameshwarnathji.

The temple in its center has one Garbh Gruh or sanctum sanctorum where the deity or vigraha of Shiva is placed. Surrounding it, are the idols of Shiva family including Ganesha, Parvati Maa, Kartikey, Kirtimukh, Nandi Gadd, Maa Gaura, Ardhnarishwar and Maa Annapurna.
Recently, on July 24th, 2004 the Shri Nathji Swaroop of Lord Krishna was established here under the guidance of Shri Nanaji Bhai, Chief or Mukhiya of Shri Dwarikadheesh Ji temple of Mathura. Arati and Madhurashtkam of Lord Shrinath ji is a very unique and different scene to experience.

Behind the main garbh gruh, there are several other small temples that lie within the premises of main temple building. These are dedicated to various gods and goddesses such as Mata Ganga, Mata Saraswati, Mata Gayatri, Lord Hanuman, Lord Krishna, Kaila Devi, Lord Narsimha, and Lord Rama.

It is a widespread strong belief that Lord Shiva promised that whoever would come here and worship his Shivlinga, his manokaamna (wishes) would be granted like those of Shiva himself.
It is for this reason that the Shivlinga is popular as Shri Mankameshwar NathJi, the Lord who makes everyone’s wishes come true. Eleven Akhand jyoti or lamps lightened with desi ghee are being illuminated here every day for whole 24 hrs.

There is one more very different attraction for people who visit here. It is the special paans that are available at Mankameshwar. These paans are folded and refolded in such exclusive way that they look like resembling a pyramid. These paans are then covered by Silver Foil, also known as “chandi ka vark" and then coconut powder is sprinkled over them.


How to Reach Mankameshwar Temple in Agra

The temple is very near to Agra Fort Railway Station. To reach here, one should head southwest on SH 39/ AH 43 for 400 meters and drive along the park on the left. At the nearest roundabout, 4th exit should be taken and after driving for 300 meters, one should turn left towards Mantola Road.
Continue driving on Mantola Road for 280 meters while passing Globe Share Market on the left side. Continue on the Sadar Batti Road and drive for 400 meters then turn left at Dhuji Mandir. After around 300 meters, the temple is on the right side.