Agra is famous for its mughal architecture. The Mughal sense of beauty and buildings are evident all round the city.  Mehtab Bagh is typical Charbagh complex located in Agra. It is built at northern side of the Agra Fort and the Taj Mahal but on the other bank of Yamuna River, at the plains that are filled by floods during rainy season.
The shape of whole garden complex is a square, and measures around 300x300 square meters which can be translated to approx 980 ft by 980 ft and is completely in sync with the Taj Mahal situated at the opposite side. 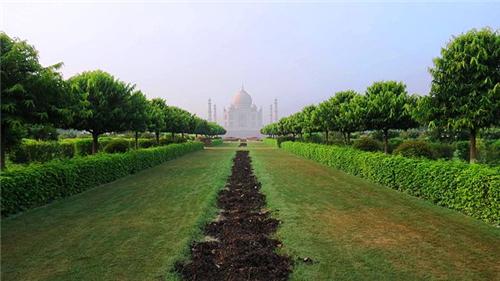 The Mughals built eleven gardens on the side of Yamuna River. Ram Bagh was the first and the Mehtab Bagh garden was the last of these. Mehtab Bagh came later in the possession of King of Amber, Raja Man Singh Kacchawa. He was also the owner of the land circumscribing Taj Mahal.

There are several inscriptions on the site of Mehtab Bagh that details the basic plan and architecture of the garden. According to these, the Bagh adjoined other gardens towards the west which were called Padshahi Chahar Bagh and the other one Padshahi Chahar Bagh Second respectively.
The river wall measuring approx. 289 meters or 948 ft long is somewhat intact. There were towers having domes at the top which were built with red sand-stone and in octagonal shape using platforms as base. These towers were said to be situated in the corners.

There is a 2 to 2.5 meters or 6 feet 7 inches to 8 feet 2 inches wide brick pathway surrounded the west side boundary around the grounds which covers the remaining boundary wall towards the west. Very close to the entrance of the garden is a small shrine of a Dalit on the side that faces river.
Towards the west, there was an aqueduct that supplied water to the garden. Presently, however, of the four sandstone towers that marked the four corners of the garden, only the tower on the south-east side remains. 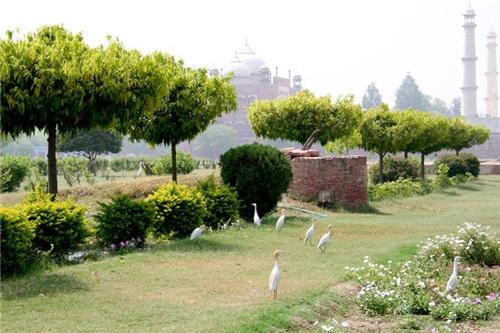 Restoration started in the 1990s, with the help of Americans and during this fencing of barbed wire was added surrounding the Mehtab Bagh. 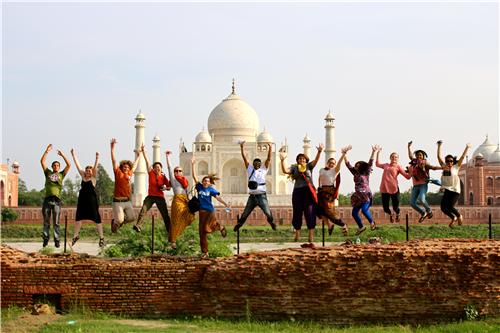 Mehtab Bagh Timings: The Bagh is open from morning to sunset time in evening.


How to Reach Mehtab Bagh

To reach here, start from station road to the east side and take the first left to the station road. Here after 130 m, turn right and passing through 1st round about drive for another 160 m. Then turn left towards SH 39 follow it towards right side for around 1.5 km, passing Hari Om Tandoorwala on the left.
Then turn left at Namner Cross while staying on SH 39. After another 2.5 km, turn left from Goyal Trading Company towards Yamuna Kinara Road and continue on NH 3/ SH 39 while passing M/S Shanti Traders on the left. Drive for 1 km then turns right on SH 39 and then turn on Strand Road. Continue on this road for other 600 meters then turn right and drive 1 km. Again turn right and drive straight for 1.1 km to reach Mehtab Bagh situated at Nagla Devjit in Agra.