Agra was once the capital of the Mughal era. This led to rapid development of the city then and many gigantic monuments were built which still remind one of the sheer power and intelligence of the Mughal emperors.
The Mughal era was an era of prosperity and happiness marked by the various architectural marvels dotted throughout India and especially the beautiful city of Agra. 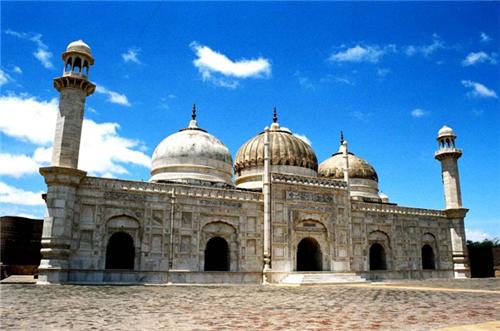 Moti Masjid, Moti meaning Pearls in English. Moti Masjid was built as a worship area for the members of the royal court of Mughal Emperor Shah Jahan. The first look at this place will remind you of the St Basils Cathedral located in Moscow.

Started in the year 1648, the mosque took six years to be completely finished. The darbar hall or the Diwan-i-Aam is to the left of the mosque and this is where the emperor held his court (darbar) for the common people of his kingdom.
The mosque is made of red sand stones and the three domes on top are made from white marble making it all the more adorable. Moti Masjid has three gates, the biggest and the most beautiful gate is the one located on the eastern side which is also the main gate. The southern and northern ends have the other two subsidiary gates.
The gates are decorated royally with beautiful arches and a few square chhatris, taking one back to the ages of kings and maharajas. The main gateways can be reached via two staircases and are built completely out of red sand stones and the interiors are done in white marble. The prayer hall has an arcade decorated with seven elegant arches.

The inland mehrab on the western wall has been engraved with six niches corresponding to their arches.  The square-shaped parapet has a beautifully designed octagonal tower and is covered over the head by seven chhatris.
Every corner of the square has a dome-shaped structure made of pure white marble. The pulpits of all the mosques all over the world have three stairs but this is the only one with four stairs.

Moti Masjid was one of the most expensive architectural project of the Mughal Era and was built at an astounding cost of one lakh and sixty thousand rupees. Moti Masjid clearly exhibits the engineering prowess of the Mughal Dynasty.

Moti Masjid Entry: Moti Masjid can be visited any time after sunrise and before sunset. The place is open seven days a week and even on public holidays.


How to Reach Moti Masjid

Moti Masjid is very well connected by all means of transport. Moti Masjid is just 8 kms from the city Airport and is in close proximity to the city center. Located within the Agra Fort complex, Moti Masjid can also be reached via bus services which run from the Power House Bus Stand. People travelling on their own must take the State Highway 39 to reach Moti masjid.
Exit the roundabout and drive on to the SH 62 for 650 meters. Take a roundabout at the 1st exit which will be after another 650 meters. The destination will be on the left.
Read More About Agra, Administration in Agra, Agra Road Trip, Agra ka Petha, Agra Beyond Taj Mahal, Agra Fort, Ambulance Services in Agra, Architecture of Taj Mahal, Black Taj Mahal in Agra, Buses from Agra, Courier Services in Agra, Chemists in Agra, Culture of Agra,  Emergency Services in Agra, Fast Food in Agra, Golf Club in Agra, Hotels near Taj Mahal,  Important Links of Agra, Top Restaurants in Agra, Mental Hospital in Agra,Veg Restaurants in Agra, Property Dealers in Agra, Lifestyle in Agra, One Day Trip from Agra, How to Reach Taj Mahal, Art and Craft Classes Agra, Gyms in Agra, Banquet Halls in Agra, Chini ka Rauza Agra, Kailash Fair in Agra, 3 Star Hotels in Agra, 4 Star Hotels in Agra, 5 Star Hotels in Agra,  Govt Hospitals in Agra, Balkeshwar Temple in Agra, Fatehpur Sikri, Kailash fair, Jama Masjid, Chini ka Rauza, I'timad-Ud-Daulah's Tomb, Keetham Lake, Akbar's Tomb, Mehtab Bagh, Food in Agra, Emergency Services in Rajasthan, Taj Mahotsav,  tomb of Itmad-ud-Daulah, Agra Fort