Musamman Burj is located in the heart of Agra. It is a beautiful and attractive Burj that shows the love and peace that persisted at the time of Mughal Era and especially during the reign of Shah Jahan.
Emperor Shah Jahan was the great art lover and had constructed several buildings during his time which now form a part of Indian heritage. Musamman Burj is an octagonal tower which reflects the Mughals architecture and paintings and has fresh surroundings that release energetic power to the visitors of this place. 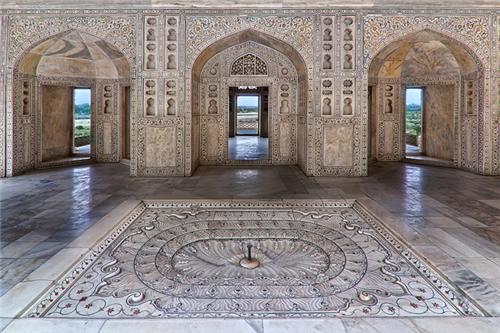 It is believed to have been constructed in the memory of Shah Jahan's beloved begum Mumtaz Mahal. This palace has its essence from that of Akbar, as this great Mughal emperor built a small marble palace near Musamman Burj and because of this the area gained attention of Shan Jahan and he decided to construct this Burj.
This was the last destination for Shah Jahan as his son Aurangzeb imprisoned this art-loving emperor here during the last days of his life. Along with Shah Jahan, Jahanara Begum was also imprisoned at this palace.
Musamman Burj was built during the time period of 1631 till 1640. It is the site were this multi-storied building was constructed and true love towards his queen was expressed in this form. This Burj also provides the clear view of the famous Taj Mahal.
The dome of the palace is crowned by gilded copper and its flooring is paved with the use of valuable marbles. It is designed in a way that it reflects the popular game Pachchisi, and due to this it is also known by the name Pachchisi Court.
The attractive design of the vertical pillars and swinging chhajjas are much more than simply eye catchers. There is a small building near to this palace which is most beautiful greatly ornamented known as Shah Burj. It is located inside the Agra Fort.