On the edge of India’s one of the most well-known River Yamuna lies the spectacular symbolization of passion and love, the Taj Mahal. The wonderful white beauty, engraves the story of love and purity of Mughal emperor Shah Jahan and his beloved wife Mumtaz.
On the sudden demise of Mumtaz, the disheartened king established this artificial beauty as a remembrance of the passionate and pure love.
The exquisiteness of the Taj and the underlying love-story is enough to enthrall the visitors visiting Taj Mahal. The place is quite close to the capital of India as well as easily communicates with various adjacent locations like Jaipur, Lucknow, Haridwar and so on. 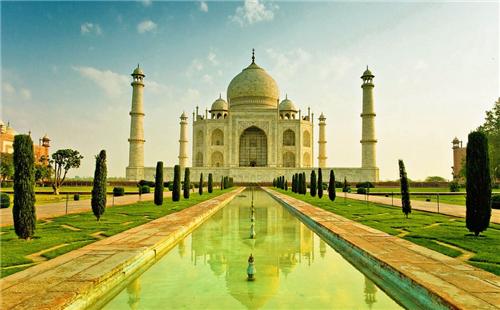 Taj Mahal in One Day
One of the wonders of the world, popularly known as the "the epitome of love", was built by Shah Jahan in rememberance of Mumtaz Mahal, and hence the name. It is situated at the banks of Yamuna. Its construction period is known to be 1631- 1653.

The Premises
The premises of the Taj Mahal consists of the monument of the Taj Mahal, the Taj Garden, The Mosque, the Mihman Khana, the Jilaukhana which is dominated by the Great Gate (Darwaza-i-Rauza), the three entrance gates to the Taj namely, the East Gate (Fatehabadi Darwaza), the West Gate (Fatehpuri Darwaza) and the South Gate (Sidhi Daewaza).

Charbagh
The Mughal Garden, which leads to the Taj, is divided into four parts, hence the name.

The Mosque
The monument is surrounded by two identical buildings on either side, with the Mosque on the west and the Mihman Khana on the east.

Before entering the Mosque, the Islamic religion requires everyone to perform ablution, i.e., cleansing oneself by washing impurities. The pond in the Mosque served as a place for ablution before the prayer.

The Mihman Khana
Also known as the Assembly Hall, it is the exact replica of the Mosque, which was built solely to balance the architectural composition. Built originally to provide accommodation for the visitors observing the death anniversary of Mumtaz Mahal, later it was used as a place of entertainment for the Indian princes and British, alike, during the late 18th and the 19th centuries.

The Jilaukhana
The Forecourt, or the front of the house, as the name suggests, served as a gathering point for the visitors, which played a host to the first death anniversary of Mumtaz Mahal.

The Taj is entered through one of the entrance gates, which leads to the forecourt. The two gates at the north and the south, functioned as the place where the visitors dismounted themselves.

The court is surrounded by the two quarters; the one at the north known as the Khawasspuras, which was the residential complex for the tomb caretakers, and Saheli Burj on the south, meaning the “tower of the female friend,” houses the tombs of the other wives of the Mughal emperor.

Fatehabadi Darwaza and Fatehpuri Darwaza
The East Gate and The West Gate, respectively, serves as an entrance for the visitors to the complex. Both the gates are built of red sandstone, are have identical architecture.

South Gate (Sidhi Daewaza)
The longer of the three gates, it is similar to the other two gates, except that it is constructed at a height above the ground level and is reached through a short flight of stairs. It connects the Taj Ganj following another set of stairs.

The best time to visit the Taj is during the Taj Mahotsav which takes place in February, every year. All the artists participate in the festival to showcase their performance.