Ram Bagh is a beautiful garden that is most loved by the visitors of Agra city especially during the hot and sizzling summers. The natural scenic and different varieties of flowers available here makes it a perfect place to spend some time and get peace of mind and relaxation from hectic routine of life.
Ram Bagh also witnesses the prime time of Mughals and the body of Babar was buried in this garden for some time and later was shifted to Kabul. 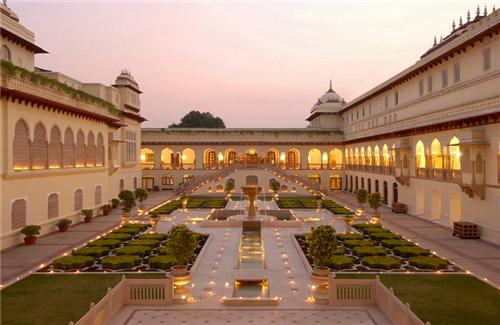 Ram Bagh is located near the Tomb of Itimad-ud-Daulah and Chini Ka Rauza which are about 3 km and 500 m away respectively in the area of Etmadpur, Agra. The foundation of this beautiful garden was laid by Mughal invader Babar in 1528 and named it as Aaram Bagh. The literal meaning of Ram Bagh is encrypted from the Persian language which means "Garden of Rest".
The other name of Ram Bagh is Bagh-i-Gul Afshan and Aalsi Bagh or lazy garden. Originally this was a Persian garden, and as per Persians, gardens refer to creating heaven on earth.Moreover, this place shows the talent of Mughal Begum Nur Jahan, the begum of Jahangir, who contributed a lot in designing. The architects and paintings along with the designs are suggested by this Begum and hold a significant part in Indian history.
The area of Ram Bagh is divided in to several parts with the flow of canals. The physical design is in the form of Charbagh pattern. There is a river flowing near Ram Bagh which adds to the beauty to the garden. It also has a Tahkhana that is the attraction of this area and visitors use it the most to refresh themselves from the bright sun.
Once the great king Akbar lied down for around 6 days to propose a gardener after which she accepted his proposal and became the third wife of Mughal emperor Akbar.  In another event, Jahangir also rested in this garden for several days after acquiring the Kangara Fort in 1621.

How to Reach Ram Bagh