The world of the written word obtained another unique global platform to bring to the surface the hidden talents of innumerable writers, literary buffs, publishers, editors and other of their ilk in the first ever held Taj Literature Festival in December 2013.
It is one of the unique opportunities for tourists to meet their literary giants and newer emerging writers all under one singular canopy of those who idolize the written word. 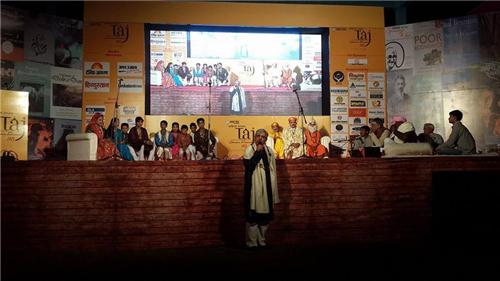 The Taj Literature Festival is an apt tribute to the eras bygone of literary giants like Tansen, Ghalib, Naisr and Soordas as well as the many new vistas to unfold in and ending fiesta of savoring the written, enacted and portrayed word.

This festival is not only a celebration of the bygone authors and the present tribe of word craft but is also a harbinger of the trends that will follow and is a riddle in predicting the future works of young and old aspirants venturing into the world of literature.

The producer and organizer of the Taj Literature Festival, Harvijay Singh Bahia voiced his motivation for organizing the magnum opus. “The festival is an attempt to rejuvenate the embers of the aesthetic spirit” that was embodied in the works of Ghalib, Tansen, Soordas and Nazeer.
The Festival also promised to look into the literary and writers’ perspective on honor killing which would border on the role of literature as action oriented literature of activism and the change bringing literature of social change. The festival holds forth the covenant of seeing several book launches and a special session of the legendary film actor, Shammi Kapoor.
The wide spectrum of topics ranges from politics to cricket and predictions of who will emerge victorious from the 2014 general elections.

The festival saw a historical production of ‘Tumhari Amrita’ directed by Feroz Abbas Khan and enacted by the film and stage stalwarts Farooq Sheikh and Shabana Azmi. Other highlights were the dynamic reading session organized by the award winning British Historian William Darymple and an acoustically delightful musical rendition by Vidya Shah.
She also regaled the audiences with the position and lifestyles of the women of Tagore’s household – their lives intertwined with ‘dharma’ and their duties towards their husbands besides their duties as good mothers and members of society. Juxtaposed against these entertaining and engrossing revelations there was the astute prediction mode of MJ Akbar who gave his views on the fortunes of the various political parties in the forthcoming elections.