Agra city has always been bubbling with hustle and bustle of tourists as well as natives. Beside its historical importance, the city also serves as a gateway of modernization.
The enchanting beauty of Yamuna River, the elegant gardens and the enormous Taj Mahal has skirted the city with love, attraction and purity. In order to slake the desire of the tourists to view the beauty of the city, government as well as private departments have introduced various means of transport. 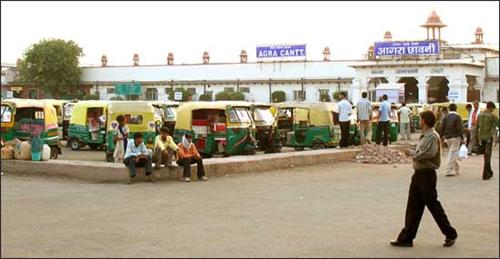 From the nearest metropolitan city Delhi, Agra is connected through railways and National highways. Railways in Agra play a very crucial role in connecting the place with the outside world.
The rail connects Agra with Delhi, Maharashtra, Madhya Pradesh, Kolkata, North-East states, Rajasthan and many more important destinations. This enhances the easy mode of communication and encourages public interest.
The major Railways in Agra are-
Few railways which are close to Agra and can manage a certain portion of prospective tourists are: 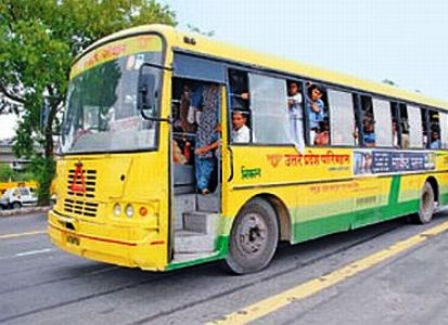 Uttar Pradesh State Road Transport Corporation or UPSRTC has introduced public bus facility all throughout the city. Agra is enriched with archeological importances which have forced more and more number of public vehicles to come on road for a better transport communication.
Idgah Bus Stand is the biggest bus terminus in Agra. This bus terminus is close to the most important Agra Cantonment and Idgah Railway Station. UPSRTC, the government bus service operates A/C,
Non-A/C, Hi-tech, deluxe as well as semi-deluxe bus service trough out the city connecting the major places like Delhi, Jaipur, Kanpur, Lucknow, Jhansi, Gwalior, Chandigar, Fatehpur Sikri and Mathura.

Plenty of A/C as well as non A/C taxi services ply on the city to provide the tourists a pleasant and comfort ride. Most of the cabs/taxies are present near airport, railway station and bus terminus.
The taxis run at reasonable rate and thus can be hired for the whole day to visit the places of interest in Agra. Fatehpur Sikri can also be visited from Agra, though the charges will be extra.
Taxi is the most comfortable or so called best way to roam around Agra. It is always advised to pre-decide the rate before hiring the cab/taxi especially for the people coming from various states.

To roam around the busy streets of Agra, one can opt for auto rickshaws and cycle rickshaws, which are much reasonable and can pierce through the crowded roads.


Cycle Rickshaws and Tongas in Agra

These are much cheaper modes of transport observed in the Agra city for visiting different places. In most of the narrow streets as well as alleys, these types of transports are allowed, which make the tour less hectic and tiring.
As the people operating these eco-friendly vehicles are not well verses with foreign languages, so it’s better to carry a map or a guide for the international tourists.


Walking down the lane of Agra

The city Agra is packed with wonderful gardens and parks. The city can be best explored by walking into the prime locations like Sadar Bazaar, MG Road, Civil lines and many more.
Various handicraft shops, leather shops and souvenir shops are located in these areas, which is bound to draw your attention.